As requested I’ll be giving an opinionated review on the movie Higher Learning. This film was directed by John Singleton (Boyz in the Hood, Poetic Justice, 2Fast 2Furious). It features Ice Cube, Michael Rapaport, Omar Epps, Kristen Swanson, and Laurence Fishburne. This review has a few spoilers, but you should watch the movie anyway. Personally I liked the movie although if I’m judging it from just a movie standpoint it was just okay. It follows three characters who are all exaggerated stereotypes. I’d say this movie interested me more for the social issues it tries to cover rather than it’s actual characters.

You have Malik(Omar Epps) who is the black man that feels he has to work harder than your average student and is automatically seen as a thug/athlete character with nothing more to offer. Although it is exaggerated I do agree that in some cases in life a black man would have to work harder to stand out. If it’s not related to sports, a black man would have to work harder than most because they’re not being sought out to begin with. Reminds me of a quote from one of Chris Rock’s stand ups, “A black man has to fly to where a white man can walk to.” His character was hard to get attached to because he complained more than he actually acted. He had no knowledge of self and came into the movie feeling entitled to things. He showed a little growth throughout the movie, but sharing the spotlight with others it’s hard to see it come full circle.

Next you have Kristy(Kristen Swanson) who is the rape victim turned lesbian/feminist/unsure what she wants type character. Another stereotype that’s exaggerated. The whole women having issues with men whether from being hurt in a relationship to being assaulted sexually. It always leads to becoming a lesbian. Plus can’t forget that she is in college so that’s when women always do all their sexual exploration. She goes back in forth in the movie not really finding a place that sticks at least it seemed that way to me. Towards the end she still seemed to be on the fence.

Lastly you have Remy(Michael Rapaport) who is the guy that just can’t fit in and is the bullied/hated/antagonist type character. Again exaggerated, first he leaves his dorm after getting punked by his black roommates. Then he struggles to fit in with some of the cooler kids at a college party, only to be swooped up by an extremists white supremacy group. How is that for exaggerated? Even that being the case the guys screaming “white power” were the only ones to accept him. I can see how some people can be desperate for friendship and will fall in with whoever. His only option just happened to be the most racists guys on campus. So you already know they got back into it with the black roommates that he had problems with initially.

Even though this is a movie. Just last year we had the protests with the University of Missouri. It was in regards to the gross amount of racial slurs black students received, how despite being a 35,000 student campus the majority was white and how they were treated differently there overall. An undergrad there by the name of Abigail Hollis said this, “The way white students are treated is in stark contrast to the way black students and other marginalized students are treated, and it’s time to stop that.” That could also be seen in this movie as well. More so from the security/police of the school. Two loud parties happening at once. The black party that’s completely indoors gets shut down by security. The white frat party which carries on to the outside got to keep going. Even towards the end the security went after the black man who just had a gun pointed at him rather than the white guy who did it. Granted at the time they didn’t know who was who, but they let the white guy pass them by no problem. They restrained the black man without hesitation. Although some of the stereotypes in this movies are definitely extreme. Some of the social issues are still prevalent to this day and they are a real problem. If this movie does nothing else, it definitely sheds light on some of the things a lot of people CHOOSE to ignore. 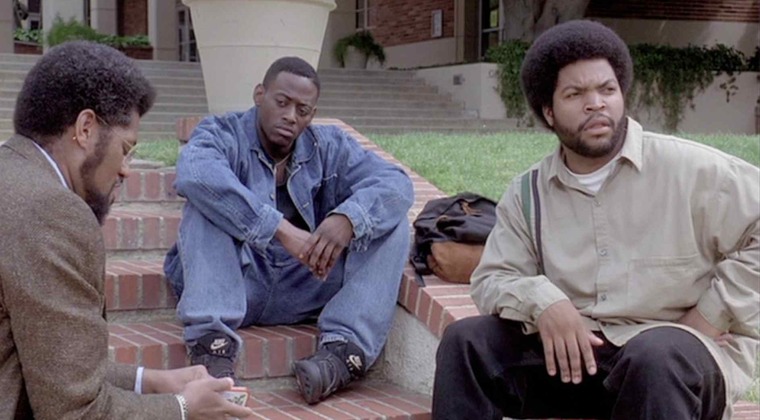